This page showcases the work of talented individuals that have found healing through creative expression.

A cancer diagnosis introduces individuals and families to new challenges, experiences and systems.  Not every experience is tangible and not every challenge is physical.  Individuals and loved ones must also manage the emotional toll that can come with a cancer diagnosis.  Storytelling, journaling, art work or other creative expressions, can be an effective way to deal with these emotions and help with the healing process.  Each month, Cancer Support Community Greater Philadelphia offers more than 150 programs – all provided free of charge.  Each month, there are multiple opportunities to participate in creative expressive programs.

The content on this page may not be reproduced or duplicated without permission from Cancer Support Community Greater Philadelphia and its members.

THE FEAR OF THE UNKNOWN

If my hair was a liquid, it would be a milkshake.

If my hair was a sweet treat, it would be a pound cake.

If my hair was a sporting event, it would be a triathlon; swimming, running and bicycling.

If my hair was a portrait, it would be the Mona Lisa.

The doctors told me that I would lose my hair because of the chemotherapy.

But it would grow back prettier and curlier.

Sometimes I wonder; no hair on my head, eyebrows or eyelashes.

Any where else I could live with the lost.

So I did what I know, PRAY.

“Lord, please Bless me to keep my hair on my head, eyebrows and eyelashes.”

I have plans for this situation!

Always have a “Plan B” I think that I could rock a Bald Head.

And Maybe “Plan C” – My husband, Gary, will rock a Bald Head with me.

Barbara is living with ovarian cancer and blogging about it.

After six months of chemotherapy for recurrent ovarian cancer, I’m now in limbo. My oncologist has prescribed a treatment for me but is waiting for my post-chemotherapy red and white blood cell levels to return to normal before I undergo another assault on them. I’m feeling better than I felt during chemotherapy, but I’m apprehensive about the new treatment. I’m also impatient, frustrated, relieved, and depressed.

The treatment I’m waiting to take is a daily pill, a PARP inhibitor called Zejula (niraparib).  PARP is an enzyme that promotes cell repair. By inhibiting the enzyme, Zejula may help keep cancer cells from repairing their damaged DNA, causing them to die. PARP inhibitors have been around for a while but are fairly new for treating ovarian cancer.  No one is claiming that PARP inhibitors cure cancer, but they have a good track record of extending women’s lives.

Of course Zejula has side effects, similar to those of chemotherapy. Some of the women in my ovarian cancer support group report that the side effects wore off after a month or two.  Others put up with insomnia, nausea, fatigue, and other sequelae for a year or more.  Still others could not tolerate Zejula and went on to another treatment, in some cases another PARP inhibitor called Lynparza (olaparib).

The oncologist presented Zejula to me as a choice. I could take Avastin, which I’ve taken before and tolerated pretty well; I could do nothing until I developed symptoms, at which point I would be treated; or I could try a PARP inhibitor. Avastin has been shown to prolong life for a matter of months, PARP inhibitors for years.

I felt that I was being asked to make the biblical choice mentioned in Deuteronomy, “I have set before you life and death, the blessing and the curse: therefore choose life.”  What could I do but choose the option with the best chance of extending my life? Even a life compromised by side effects is a life.

Now I want to get on with it. I may dread the side effects, but I’m impatient to start on Zejula.  The blood tests I got on April 14 show that my red and white blood cells are about where they were after the last dose of chemotherapy, five weeks earlier. I’m frustrated with this body I’m stuck in, I want it to heal so I can go on to the next treatment. Why aren’t the blood cells recovering?  What am I doing wrong? What should I eat? What supplements should I take, tea should I drink, breathing exercises should I try, meditation should I do, acupuncturist should I see? Which is the magic bullet?

All of the kind, reassuring things I would say to a friend in the same position are not working on me. I hate waiting. I want to do something.

What I want most of all is not to have cancer. I’d like to go back a few decades and live a healthier life, to forestall the diagnosis, or to prevent it by eating better and getting more exercise and not stressing over work.  From this vantage point, very few of the things I’ve agonized over in my life were worth the misery I put myself through. Can I see that the same is true of this moment in time?  That I should I stop wringing my hands over the blood cell levels and focus on enjoying every moment I can?

Good advice if I can take it.

THANK YOU, CHEMO; I HATE YOU

Claire was diagnosed with breast cancer in 2019. She’s been married to her husband for 37 years and has two adult children who bring her joy every day (well, almost every day).

Breast cancer didn’t kill me but it brought me to my knees. And chemo? It saved my life but threw me in the mud, held my head down, twisted it in the muck, then kicked me in the ribs on its way out. I hated and always will hate chemo.

During chemo I would cry to my oncologist about the side effects. He’d say, “a little pain, Claire, for a lot of gain.” Okay, number one it wasn’t a “little” pain, it was a lotta pain. Number two, “Doc, you gotta come up with a better line.”

But this article isn’t only about my oncologist or chemo, it’s about a word I’ve decided not to use: gratitude. Before all you optimists go ballistic, let me say up front that I am not a glass-is-half-full kind of person. For me, the glass is perpetually half empty. The cupboard is bare, the lot is vacant, the well is dry. And my metaphors are all used up. So take this to the bank: I’m not going to be using the “G” word.

We pessimists live in the real world. If we didn’t complain how do you think things would get done? You think there’s change in the world because optimists change it? Hell no. Pessimists do. We look at the world and declare, “Some people see things as they are, and say ‘that’s not so bad’; I dream of things that never were, and say ‘why the heck don’t we have that?’ ”

Back to chemo for a second. I am fortunate that I had the best medicine Medicare and a good Medicare supplement can buy. I have a family from heaven who helped and supported me beyond measure. My friends brought me dinners, presents and companionship which meant more to me than I can explain. That’s good fortune and I am indebted to them. I thank them from the bottom of my heart. I’m beyond appreciative.

But chemo? It may have saved my life, but it was a horrid treatment. Made me bald, nauseous, exhausted and depressed. It blew up my digestive system, gave me severe bone pain, ruined my nails and gave me pimples. Pimples! At age 65!

So yeah, thank you, chemo, but I’m not grateful for you. Seriously, I hate you.

I am so glad to hear that my chemo has ended! I’ve been such a trooper – the fact that my side effects have been luckily minimal does not lessen the fact that I have been through a physical as well as an emotional journey. I adapted to a routine that no one wants to go through with grace and aplomb, and have mostly kept a sunny attitude. I have generously shared the lessons I have learned (and are learning) with others, giving back as it is in my personality to do (almost 300 of my “Facebook friends” reacted to my series of “Cancer is My Teacher” posts!).

I know I am now at a scary juncture, with the future less clear than it was before my diagnosis, and of course before my course of chemo treatment that came with its own predictability of day, time, place, and people. I can sense the beginning of my “scan-xiety” with the upcoming scheduling of a post-chemo PET scan (at least now I know what a PET scan involves, since I had one before my surgery). I know it is not the scan PROCESS that has me anxious, but rather any findings, and wondering what it means for the “next steps” in my treatment.

On the way to chemo…

Rochelle, caregiver to my husband, Doug, for 4 years of Colon Cancer 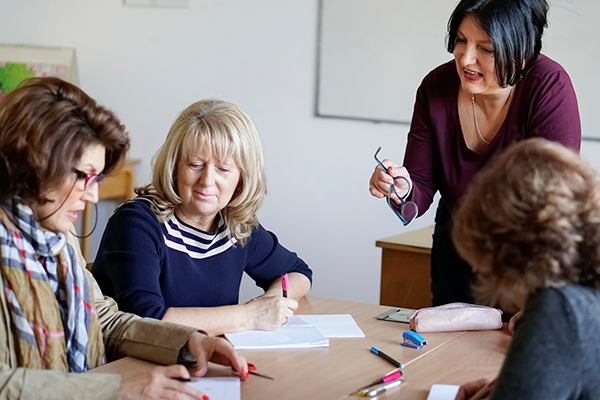 Saturday Events are a "Go in the Rain"

Please park at Ann’s Choice, 30000 Ann’s Choice Way for both events.  Stop at security for a pass and map to parking lot G or CC directly next to the event.